What is the late November doing

With the disturbance of the spring

And creatures of the summer heat,

And snowdrops writhing under feet

And hollyhocks that aim too high

Red into grey and tumble down

East Coker is a place that has mostly won the battle to preserve its rural charms, mainly due to the Eliot connection, and still has few modern buildings or street lights. Visitors come to see the “deep lanes”, “the open fields”, the houses of “grey stone” and the “hollyhocks that aim too high”. It has even been said that Eliot based part of his poem on the 1876 Friedrich Gerstäcker tale of the mysterious community of Germelshausen, where the population had been cursed by the pope and were only allowed to come out of the earth for one day of revelry every hundred years. There is certainly a feeling of liminality when entering the village through the ancient lanes that resemble tunnels into another world. And it is not too difficult to imagine that the place is haunted by the spectre of an earlier time which can only be faintly glimpsed at certain moments.

The morning I met Alan Cornelius – the old man who had taken the photograph in Coker woods on that Whit Monday over sixty years ago (see In my Beginning is my End) – the village was looking its time-warped best. The jaunty, red, white and blue bunting strung up between the thatched houses in the main street hung still in the mid-summer air, and the sounds of hay stooking cut across the yellow fields. The Helyar Arms was preparing for its first customers, and the church was alive with the bustle of middle-aged women setting the final touches to the arrangements in St Michael’s Church flower festival.

By noon the cow parsley in the hedgerows was wilting in the heat, and the exhibition in the village hall was coming to a close. We called those long wooden sticks ‘staves’ back then Alan Cornelius said, as he packed away his black-and white copy of ‘my’ photograph amongst his other WW2 memorabilia. And we were off to fight the enemy in the woods. He shook his head. It seems like a lifetime ago now!

Among all the other bits and pieces on his stall that the younger visitors to the exhibition found so fascinating, was a copy of his childhood diary. The short, scribbled entries illustrated just how exciting the war could seem to a thirteen year old boy. There were numerous descriptions of long bike rides searching for incendiaries in the surrounding fields, building model aeroplanes bought from a shop in Yeovil, watching out for enemy aircraft, visiting the local Westland Aircraft Factory (where Lysanders or ‘Lizzies’ were built).

One diary entry triggered a particular memory for Alan Cornelius which made me smile: Early on in the war a bomb fell on a nearby farm, killing a bull. Your dad said this was ‘abominable’. It was typical of him. He always was a sharp one. I thought back to how my father used to make up  limericks and nonsense rhymes when we were young, and could imagine him honing this skill amongst his peers. He had arrived in the village with his mother and baby brother as a ‘lone’ evacuee, not as part of a school group, so a sense of humour and an aptitude for word play might have eased the path to acceptance by his new classmates.

My aunt was actually the first in the family to be sent to East Coker when war broke out, being evacuated with part of her school, and was the reason my father finally ended up in the village. Alan Cornelius described this event in his unpublished memoirs as such:

The pupils of the Charles Edward Brooke School for Girls in Camberwell had left their school at 8am on the morning of Friday September 1st, and after a train journey of over four hours from Waterloo to Yeovil Town Station via the Junction, arrived at the reception centre in the Yeovil Liberal Hall in the early afternoon. Here they were divided into ‘Village Groups’, and the East Coker contingent arrived at the village hall sometime around 4pm, resplendent in felt hats, uniforms and badges, and with school staff, house mothers and an air of genteel respectability which most foster parents found very acceptable and in stark contrast to the primary school children from Battersea who had preceded them by some hours. Even so, there was still the air of a cattle market over the business of placements in foster homes.

Children from the Charles Edward Brooke (girls) School boarding trams in Camberwell New Road. The children are to be taken to Waterloo station for evacuation, 1939. (1998/36461) (c) London Transport Museum

Click here to read a personal account of evacuation from the Charles Edward Brooke School, (which coincidentally was recorded on the day I first visited East Coker).

While my aunt was sent to Somerset, my father was initially evacuated with the local Gipsy Hill primary school to Leatherhead in Surrey. There he was billeted alongside other children with a Mormon family whom he remembered chiefly for the fact that they gave their charges the cast-off bicycles of the junior members of the Kennedy clan. (Joseph Kennedy – then American ambassador to Great Britain – had stayed in a house in nearby Headley during the first year of the war, before being forced to resign in November 1940). I like to imagine my father cycling to school on J.F.K’s old bicycle, and sometimes wonder if that was the catalyst to my parents’ on-going joke that our family and the Kennedys shared a series of (near) parallel death dates. In an uncanny twist of fate, my father was to eventually die in January 1995, several hours before Rose Kennedy did.

Within a year, my father was back home in West Norwood  – like many London families the ‘phoney war’ had lulled them into a false sense of security – with my grandparents omitting to tell my aunt, lest she want to return too. My father remembered the constant trips to the air raid shelter (seemingly always when he was in the middle of a setting out his lead soldiers), so this would have been in the autumn of 1940, around the time that the bombing  started in earnest. Having only recently moved the family from a dilapidated Victorian terrace in Brixton to a modern, cottage-style semi on the Bloomfield Hall Estate, my poor grandmother must have despaired at ever being able to create the comfortable home she craved!

One inauspicious afternoon, my father arrived back home from school to find my grandfather standing at the end of their road, a couple of battered suitcases at his feet, telling him that their house had taken a hit and they would be ‘going away’ (the London bomb maps shows the area was heavily shelled during this period). It is one of the very few things I ever remember my father telling us about that period in his life – apart from the spectacle of watching The Crystal Palace burn down from his upstairs bedroom window in the old house in Denmark Road.

In the end, my grandmother took my father and his brother to Somerset to join their older sister in a bid to keep her children together, while my grandfather stayed in London working as a tram conductor out of the Camberwell depot. From my aunt, I know that this was not an easy time for my grandmother: in her first billet she stayed with a woman who lived in a cottage opposite the church, and who treated her like her own personal skivvy. This must have been galling to a mature mother of three who was used to being mistress of her own home, but she eventually found a more convivial place for the family in a cottage at Burton Farm, where the Dunning family lived. And this was the place where my father retained strong memories of helping out on the farm with the other children – and which gave him his lifelong love of the British countryside. 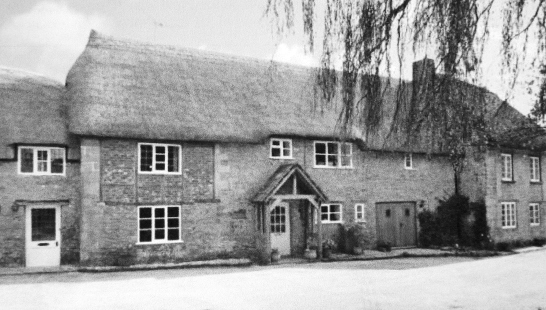 The more I heard from Alan Cornelius about life in East Coker during the war, the more I realised that evacuation to the village would not necessarily have been a hardship – as long as the children were placed with a sympathetic household. The villagers appeared to have made a great effort to integrate the evacuees, and many of the youngsters were pleased to welcome the newcomers to their clubs and dances. What adolescent hasn’t rejoiced at the injection of new ‘talent’ into their midst? Alan Cornelius describes the impact of the arrival of the girls from the Charles Edward Brooke School thus:

The Primary school children (from Battersea) with the few parents that accompanied them, soon became bored with country life. With the ‘Phoney War’ extending into 1940 and seeing little reason to remain evacuated, they returned in ones and twos to their familiar life in the city. A few did come back when the Blitz started in earnest and their school in the Mission Church in Burton remained in operation until nearly the end of the war. 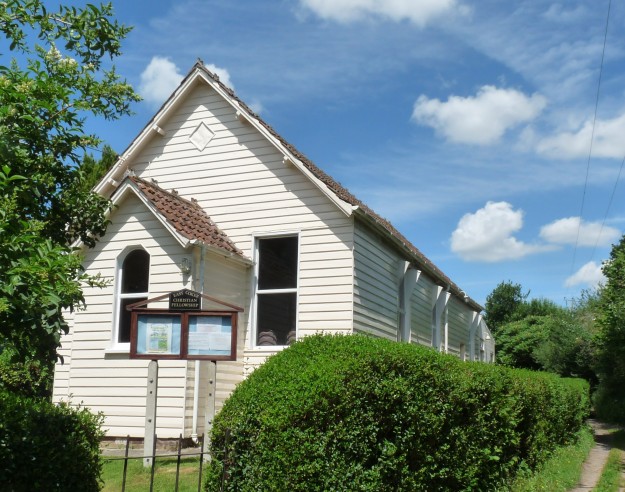 The Mission Church, Burton Lane, which my grandmother used to clean when it was used as a school.

The CEBS girls, however, settled down quickly, adjusted to the quiet country life and were much more concerned to complete their education with good School Certificates. Each day, coach loads of girls were bused in from the villages, and in the early days the local company of Barlow and Phillips used their rather ancient (even then) char-a-banc, a wide-bodied vehicle with a folding canvas roof and celluloid windows, on the East Coker run. A relic from the 1920s outings to the seaside, it produced much merriment with us ‘lads’, particularly if girls of our acquaintance were traveling in it. It didn’t take long for some of those to blossom into more fulsome friendships, although the village foster mothers were probably even more protective than their natural ones in guarding their charges from the amatory advances of the local youth.

The ‘local youth’: East Coker Boys Club, 1944, at Coker Court. My father is on the far left (kneeling). Alan Cornelius is 3rd from the right (seated).

Despite the charms of East Coker, for the rest of his life my father was to wonder at what might have happened had he been able to take up his scholarship to attend the prestigious James Alleyne’s School in Dulwich. He remembered the smart uniform which had already been bought, and the sense of life about to begin; but the war sent him off spinning in another direction. East Coker, however, kept him rooted during a time of great upheaval and chaos. And he was, I believe, always grateful for that. 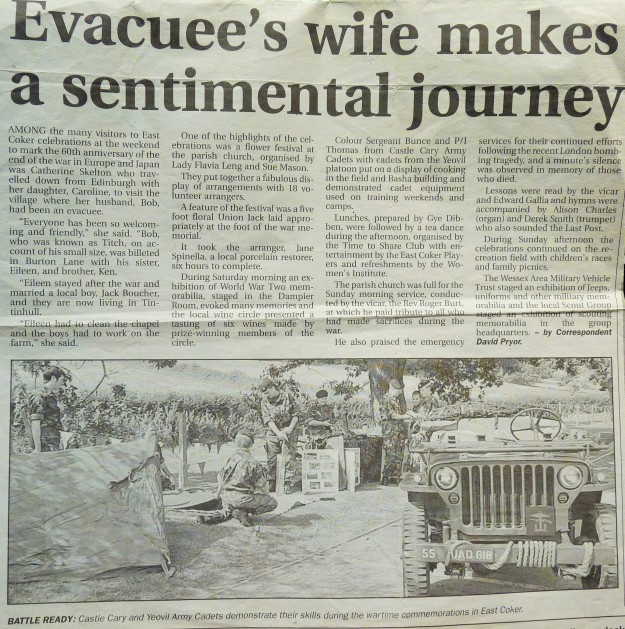 Western Gazette, July 15th 2005 (some factual inaccuracies in regard to our story). Click on the image to read.

To be continued next month in I Remember, I Remember . . .