With luck, you may find an immobile ancestral family, living half a century in one place. In the space of an afternoon in your library, you can observe them in a succession of census returns. It is hard to bring to mind that the family snapshots you uncover – 1841, 1851 and so on – are moments in time. They tell you nothing of the intervening years of economic slump, ill health, bereavement, day-to-day grind and routine of life in the un-centrally heated and outside toileted 19th century.

When my great-grandfather, Arthur Skelton, married Elizabeth Holton in the summer of 1880, not only was his pregnant bride unable to write her name, but the twenty-one year-old Arthur did not know the occupation of his deceased father. This comes as no surprise – James Skelton was sixty when his second-youngest son was born, and already retired from his profession as a master tailor. When he died from a severe bout of bronchitis in 1867, Arthur had only just turned eight – and as the years passed the memories of his elderly father would have become more difficult to recall, kept alive perhaps through the stories of his much younger mother and older siblings.

I often wonder whether the rather feckless life that Arthur seemed to have led was partly due to the early loss of his father, which put the focus of the family on survival, leaving scant opportunity for self-improvement. Arthur and Elizabeth’s relatively poverty-stricken life, which culminated in Elizabeth’s demise from  cirrhosis of the liver in 1895, and the death of their youngest child from malnutrition shortly afterwards, appears to have been blighted from the start (see The Two Arthurs). And yet I had never really questioned this before – it seemed to be a fairly average life history for the period, given their class and background. But years later, when the internet allowed me to dig a little deeper, I found out something that hinted at the possibility of a very different path that could have been taken.

What Arthur probably never knew was that for the first forty years of his life he had had a much older half-brother from his father’s first marriage, who was a successful merchant in the West Indies. Also called James (like his father), he had grown so wealthy through his dealings in mahogany in British Honduras (now Belize), that by the time Arthur was born he could have easily given him and his other half-siblings more than a little nudge in the right direction. However, it seems that James William chose not to acknowledge these children of his father’s second, embarrassing marriage; while at the same time his own boys attended Cheam, then Eton and finally Oxford, hobnobbing with the good and the great along the way.

And what Arthur might also not have realised was that his father, James Skelton, had actually been born a Yorkshireman, taking his first breath among the sheep-covered dales on the last year of the old century. By the time he died in Kennington in 1867, the predominantly rural life into which he’d been born had given way to the Age of Empire and Steam. Over the course of his lifetime he saw his adopted home in South London lose its last remaining garden nurseries, ropeways and tentergrounds to new industries and railways, while the children of his first marriage moved to far-flung corners of the empire in search of wealth and power.

He also witnessed his stable home life derailed by two catastrophes in the late 1840s: the death of his first wife, Sarah, after twenty-three years of marriage, followed two years later by the loss of his eldest daughter, poignantly named Margaret Sarah, after his mother and wife respectively, and possibly the child with whom he was closest. These twin ‘disasters’ precipitated what I now believe was some kind of mid-life breakdown, Victorian style. In the spirit of the era, the fifty year-old James ran full pelt into the comforting arms of a teenage single mother – a young woman who, to later generations, would seem to have walked right out of the pages of a Dickens novel. From her name (Mary-Ann Hawkins), to her background – born in 1830 in the Queenhithe dockside district of the City to unmarried teenage parents who ended up in the workhouse along with her younger siblings – to her rather ambiguous profession of ‘needlewoman’, she oozes mid-Victorian melodrama, and is one of the characters in the family story in whom I am most fascinated.

When I first came across Arthur’s parents in the 1861 census at 35 Aldred Road, I naively took the enumerator’s information at face value: that Mary-Ann Hawkins was the young widowed housekeeper to the elderly widower, James Skelton, with her own family of five in tow (the youngest, Sidney, was not yet born). Not only did the children all carry their mother’s surname, but it had even been noted on the census return that these were the children of the housekeeper NOT James Skelton, the retired tailor. So I naturally assumed that there was a chance that our family were in fact a branch of the Hawkins family, causing much merriment (including terrible pirate impersonations) among my close relatives. However, as I slowly gathered the birth certificates of their children together, the true picture of James and Mary-Ann’s relationship came out from the shadows of the census.

More recent research has confirmed what I eventually suspected to be true – that between the 1851 and 1861 censuses Mary-Ann was giving birth to James Skelton’s second set of children, possibly in secret from his other adult children, at various rather seedy locations throughout The Borough. Until Arthur and Sidney (who was also mistakenly christened Arthur!) arrived and the family were established at Aldred Road near Kennington Park for almost half a century (making me one of the lucky researchers mentioned by Andrew Todd above), it appeared that James continued to live with his grown-up unmarried daughters in his much grander family home in Brixton. It was not until 1864 that the 65 year-old James – perhaps aware his time was running out – made his relationship to the 34 year-old Mary-Ann legal, turning all six children into Skeltons in one fell swoop.

Arthur and Sidney’s birth certificates were what eventually led  me to the Hawkins-Skelton family at Aldred Rd, their details caught on paper by the 1861 census. As I have already pointed out, in those days it was impossible to search for a census return unless you had an address, unlike today where a name search can suffice. I had thus never been able to find my great-great-grandfather, James Skelton, previously to 1861 – and had spent hours in the public records office in Chancery Lane poring over the microfiche of the Newington census returns in the hope of locating him somewhere in the district.

When years later I finally found him in 1851, he was officially living at Sutherland Terrace (part of Coldharbour Lane) in Brixton, with two of his unmarried daughters and a general domestic servant. Jumping back yet another decade, he was ensconced in Horsleydown Lane in Bermondsey, a stone’s throw from the river, with his full quota of family around him: his wife, Sarah; four daughters; and his son, James William, (plus the inevitable domestic servant). Further research filled in the gaps between the censuses, but the general pattern was one of upward mobility. In fact, in the late 1840s, when James was faced with the two deaths that changed the course of his life, he had already moved his tailoring business to more lucrative premises at East Cheap in the City.

The late Georgian house in quiet semi-rural Brixton into which James (no doubt proudly) moved his family in 1844, was much grander than the small 18th century terrace house by the Thames, where they had lived for almost twenty years while James built up his tailoring business in a shop below their living quarters. The first census returns for the poetically named Horsleydown Lane in 1841 show that many of the residents made their living from the river – often working as mariners, waterman or lightermen, while in Coldharhour Lane (a name now unfortunately associated with the 1981 Brixton riots)  the householders mostly earned their incomes from  trading and working in the City,  as well as the new middle-class professions, such as teaching and accountancy. And not only had their neighbours’ status changed with the move, but  the noise and chaos of the nearby Anchor Brewery in Horsleydown had been replaced by the peacefulness of Brixton’s market gardens – including a  large cabbage field in front of  their house, which was not developed on until much later in the century, and a relatively large garden of their own to tend at the rear of the dwelling. 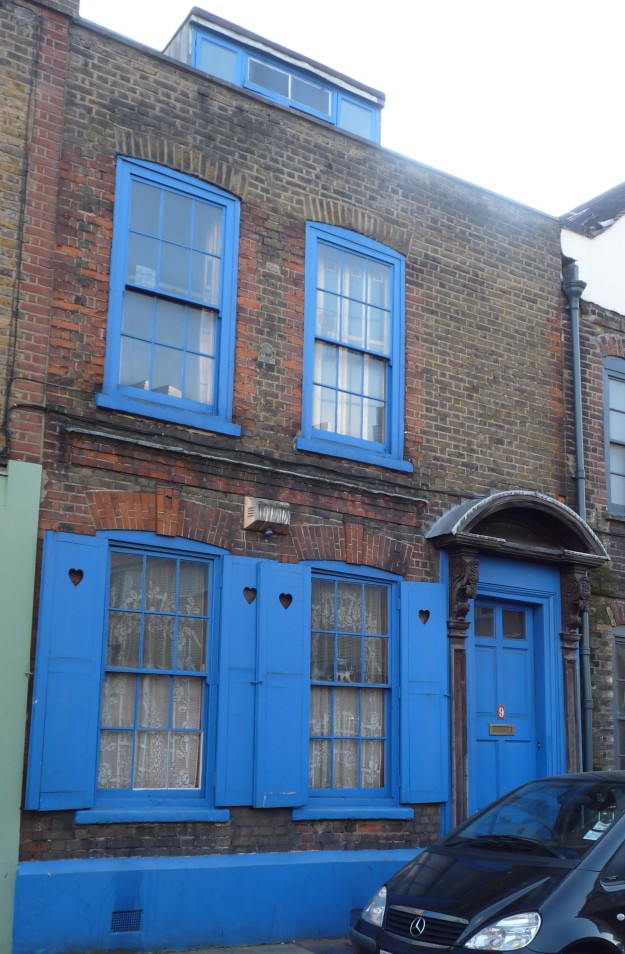 Aldred Road in Walworth certainly appears to be a backwards move for the middle-aged James,  whose  Brixton residence was officially named ‘Crichton House’ (although perhaps not by himself). Not only was there no extra domestic help, but there were the six hungry mouths to feed, and all the time the critical gaze of his successful adult children would have been upon him (who no doubt looked disparagingly at their father’s non-legal set-up with a woman younger even than themselves). And while these children had been encouraged to clamber out of their class through hard work, education and shrewd marriages, their father had in effect thrown away everything he had spent his lifetime working  for in order to bring up this second family of wild little Cockney kids, none of whom he would see grow to adulthood.

Throughout his father’s later years, and even after his death, the upwardly-mobile James William insisted on referring to James Skelton as a ‘gentleman from Brixton’ in what I believe was most likely a willing attempt to obscure the last two decades of his father’s life and blot out the existence of the widowed Mary-Ann and ‘those other children’.

This is obviously a complex and sensitive story, of which more details will emerge later. But in many ways I am very proud of my great-great grandfather, James Skelton, for defying convention to stick by his much younger lover, who he could just have easily discarded at some point between the censuses. Aldred Road may not have had quite the same cachet of ‘Crichton House’ in Brixton, or the lively qualities of riverside Horsleydown, but it certainly gave those six Hawkins-Skelton children the chance of a stable family home for as long as possible, turning them into the ‘immobile ancestral family’ quoted at the start, very few of which are to be found among the Victorian urban working population.