In the dark – but often spiritually illuminating – time between Christmas and New Year, it is customary to look back on the previous twelve months while attempting to plan for the next. I say attempt because not only do good intentions often go astray, but there are many events that can derail future plans, not least human fallibilities.

Five years ago I made the resolution to write up my unknown London family history in a series of blog posts intended to replicate the chronological chapters of a book, although the project did not become a reality until 2015. Prior to that, I had been going around in circles, unable to finish any one topic because there was always something extra to research, another fact to verify, or a new location to visit. But by setting myself official monthly deadlines, I was eventually able to circumvent this procrastination, at the same time moving my story forward in ways that I had not imagined at the beginning of my quest.

I do sometimes feel, however, that there is a price to pay for this ‘living in the past’. Not only can it be quite dispiriting to see how quickly a life is begun and ended, but it can be tempting to ignore the hardships our ancestors faced and instead become nostalgic for the lives they once led, particularly in today’s crowded and fast-paced world. This feeling is particularly prevalent at Christmas – a festival that we naturally associate with the 19th century, especially London, in part due to Charles Dickens’ perennial Yuletide classic A Christmas Carol. Yet, we often forget that many of the Christmas traditions we associate with the Victorians were only being established at this period, and that there would have been huge gaps in the expectations of the wealthy and the working class.

Having been born in the last year of what was long ago called the old century, my great-great grandfather, James Skelton, would have witnessed those changes throughout his life. It was not until he was a relatively mature father of five (in 1834) that Christmas Day was officially declared a public holiday, and several decades before Boxing Day was also given this status. Christmas Day for James and his growing family would not have differed much from other days – as it was for my Scottish grandparents up until the 1950s – but by the time he had established his second family in the 1860s many of the customs we now take for granted were already in place. I therefore like to think that the Christmas traditions I experienced as a child, and which my father inherited from his parents and grandparents, stretched back over a hundred years, while being modified on the journey.

As I have previously described (see The Ghosts of Christmas Past), Christmas for us as children was celebrated more in the English style. (Although Scotland had caught up in the intervening decade or two, I was aware that many of our family rituals seemed rather overblown in comparison to my friends). Along with Guy Fawkes’ Night, it was the festivity we most associated with our father, who did not recognise our Scottish customs of Halloween and New Year. While I don’t remember the big London Christmases of my early childhood, most of those same traditions were carried on in our own family home throughout the 1970s and into the 80s. As our Scottish relatives did not live nearby, it was usually just our nuclear family of four, and I always enjoyed that quiet period in the days between Christmas and New Year where there was nothing much else to do but go for long walks with the dog, returning to new books and mince pies, along with a glut of fresh pens and paper for all those creative endeavours that petered out during that first week back at school in January.

Like many people, I continue to associate this time of year with contemplation and reflection: a chance to not only think about new ventures, but to consider the direction in which our lives are going and how to find our way back to the old paths we might have allowed to become overgrown with the passage of the years. And family history can help us to do just that – to reassess our future in relation to the past. Unhealthy patterns of behaving or relating may be discarded or amended in the light of knowledge of the effects of past actions on future lives. We realise that relatives who fell out with each other over something petty went on to deny subsequent generations the chance to connect with each other. We wonder if a misguided late Victorian parent may have prevented a bright child from reaching their potential. And we learn that war created upheavals that reconfigured family dynamics for decades to come.

Of course there are kindnesses to consider, too. An unknown aunt who bestowed much-wanted toys on younger relatives before dying young; a grandfather who made intricate dolls-houses (with real electric lights and wallpaper!) for all his four grand-daughters; the Somerset villagers who showed compassion towards a family of London evacuees. And in the present day, there are newly-discovered relations (some too distant to ever have met in the traditional way) who have supplied photographs and documents as well as those all-important personal anecdotes. And that is before mentioning other researchers, historians and writers who have offered advice and guidance, some becoming friends along the way.

Genealogy can also encourage us to regard time differently. Past, present and future may slip and slide into each other. What would my Bermondsey ancestors make of present-day Bankside, with the strange apparition of old-new Tower Bridge appearing from the river mists at the end of their narrow, cobbled lane? Or at the sight of Shakespeare’s Globe rising out of the debris of what to them was modern wharfs and warehouses? Of course, any visit to the capital after some years away can create similar sensations in the modern mind. When I first returned to London to pick up the genealogical quest I’d started in the 1980s, the unexpected changes to the city confused me. Hadn’t there once been an iron railway bridge across Ludgate Hill, spoiling the view of St Pauls’ Cathedral from Ludgate Circus? And look! There was the ‘lost’ Temple Bar, re-erected in an unrecognisable reincarnation of Paternoster Square next to St Paul’s. Strange new tube stations had also sprung up in unexpected places like fungi arising from the hidden network of their underground mycelium. Not only that, but a fast train line now linked London with France, bringing us closer to our continental neighbours.

However, it is the social aspects of family history which I often find most illuminating. In my own quest to find out about my London ancestors I have been both surprised and disappointed by the fact that the ‘lost’ wealthy branch from my great-great grandfather’s first marriage (in particular his merchant son, James William Sleath-Skelton, see A Tale of Exploitation) seemed unwilling to help the other second family to prosper in an increasingly competitive and industrialised world. Although the unorthodox – yet not uncommon – living conditions of my great-great grandfather and his much younger partner (who only became his wife shortly before his death) may have offended the High Victorian sensibilities of the adult children from his first marriage, I wonder if they did not feel some sort of duty towards the struggling descendants of this union, most of whom had to leave school relatively young and take up manual work. Was there no Christmas spirit among them which might have seen a food hamper delivered to the Hawkins-Skelton’s cramped terraced house in Kennington, or a box of toys for the children? After all, these were their half-siblings, children whose many descendants would move out all over South London, going on to fight for King and Country in the 20th century’s future wars.

While Dickens was spreading the message that Christmas should be a time of giving and togetherness, many wealthy families up and down the land, including the Sleath-Skeltons, were obviously donating to specific charities. But while it may have been easier to give to anonymous individuals under the umbrella of a charitable organisation, it seems that when it came to their own relations some preferred to shun those deemed less successful than themselves. Ironically, it was just at the time that Christmas was reinstated as a public holiday, the New Poor Law of 1834 was coming into effect, something I have discussed before in relation to my great-great grandmother’s (Mary Ann Hawkins) immediate family, most of whom fell foul of this law and ended up incarcerated in separate workhouses, despite their protestations for parish relief (see When I Grow Rich).

Dickens was vehemently against the amendment to the poor law, which saw parish or ‘outdoor’ relief being replaced by the punitive workhouse system. He viewed the new law as anti-Christian, writing his novel Oliver Twist in response to this and other social injustices of the time, particularly towards children. It is interesting to note that several years later he visited the Norwood School of Industry (a sort of children’s workhouse) in South London, to which Mary Ann’s younger siblings had been sent while their parents were in the separate (male and female) City union workhouses. Were little Emma and Sophia Hawkins aware of the illustrious visitor in their midst that day in 1850, when they were no doubt displayed as examples of how ‘industrial schooling’ was able to improve the lives of what Dickens called compounds of ignorance, gin and sprats in his article about the school (entitled London Pauper Children), which was later published in his new journal Household Words? 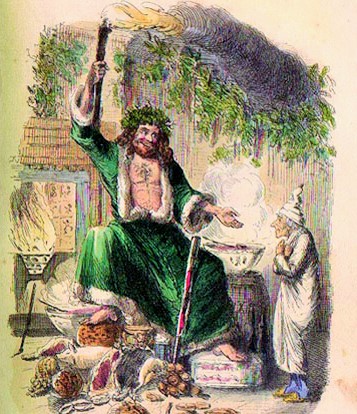 Illustration from Dickens’ A Christmas Carol (1843) by John Leech

Perhaps the last words of this post should be given to Ebenezer Scrooge’s nephew, Tom, who appears at the start of A Christmas Carol, explaining to his embittered  uncle why he believes in celebrating Christmas: I am sure I have always thought of Christmas time, when it has come round – apart from the veneration due to its sacred name and origin, if anything belonging to it can be apart from that – as a good time: a kind, forgiving, charitable, pleasant time: the only time I know of, in the long calendar of the year, when men and women seem by one consent to open their shut-up hearts freely, and to think of people below them as if they really were fellow-passengers to the grave, and not another race of creatures bound on other journeys. And therefore, uncle, though it has never put a scrap of gold or silver in my pocket, I believe that it has done me good, and will do me good; and I say, God bless it!