The Wool-comber cleanses and prepares wool in a proper state to be spun into worsted, yarn &c. for weaving and other purposes.

This is a very ancient trade in this country, wool having been long reckoned one of its staple commodities. The raw material, as is well known, is the hair or covering of the sheep, which, when washed, combed, spun, and woven, makes worsted, many kinds of stuff, and other articles, adapted to the use, comfort, and even the luxuries, of life. 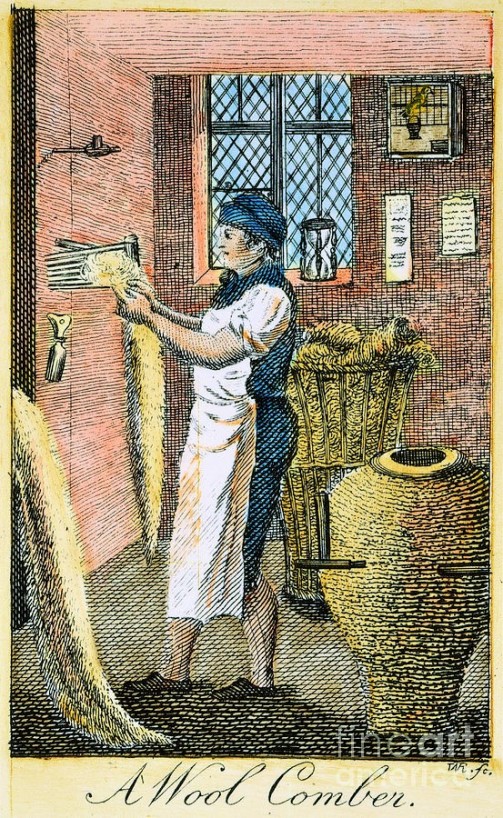 March 1799. A boy is born in Darlington, County Durham and baptised at the imposing St Cuthbert’s Church. He is the second child of a wool comber called James Skelton. The boy is named after his father, who in turn was named after his. Three generations of James Skeltons already. And it doesn’t end there. The last was killed in the fields of France just over a hundred years ago. This most recent incarnation – ‘Ginger’ as he was known to his friends and family – was my grandfather’s favourite brother. After him, there were no more boys called James.

James the wool comber is only 22 when his namesake child is born. And he is still only 22 when he dies at home from ‘the Bloody Flux’ (or dysentry, as we’d call it today), leaving behind a widow and two infant children. But Margaret Skelton is no stranger to widowhood, having already experienced the loss of a husband before she married the twenty year old James in the North Yorkshire village of Catterick while pregnant with their first child, Mary. She just doesn’t expect this state to be visited upon her again so soon.

After James’ death, Margaret returns to North Yorkshire – most likely to collect parish relief. It is still more than thirty years before the draconian poor law will be introduced (see When I Grow Rich) and the spectre of the workhouse would in the future loom over such a family. So she and her children are relatively lucky. Perhaps they also have family to support them, and work that Margaret can do to help pay for her keep. James’ people come from Leyburn, hers from neighbouring Reeth. So they are not so far away from Darlington, a market town whose name will one day become synonymous with a new-fangled mode of transport that Margaret will probably not live to see. Steam locomotives and workhouses: two sides of the tarnished Victorian coin which symbolises the progress of that still future era.

Almost two centuries after James’ death, one of his descendants will start trying to trace him through the link to the son he barely knew – the boy who ‘done good’ and went off to London to seek his fortune (see The Tailor of Horsleydown). But she will fail and fail again for many years. Then one day she’ll make a breakthrough and will feel as if the clouds have parted and she has discovered some inescapable truth about the world. For she will realise that a place, a church, a landscape which has drawn her close is the same one that once nurtured her ancestors. And she will rush to the washroom of the Durham County Record Office to splash cold water on her face. Afterwards she will gaze at her reflection in the mirror above the sink as if she is looking at herself for the first time.

I’m from Wensleydale she’ll whisper to herself, over and over again, like an incantation.

Finally she feels that there is a place she can call her spiritual home.

Is this my spiritual home?

When my great-great grandfather, James Skelton, married for the second time in 1864 at the age of 65, he had already lived almost three times as long as his father. By then he had a total of ten children (several of whom had predeceased him), ranging in age from forty to four. He had also experienced great social and technological changes in the world and had seen his adopted city of London transformed into a huge seething metropolis. He might have felt as if he had already lived three lives.

Like all official marriage certificates, James and his wife Mary’s document states their fathers’ names and their professions. In the case of James this is given as James Skelton, Wool Stapler* (deceased). If that information is added to the census data for the three decades in which James was enumerated – where he gave Catterick, Yorkshire as his birthplace – then it seems logical to assume this was the place where he was born and raised, given that Catterick was a hub for the 18th century wool business. So why had it never been possible to find my great-great grandfather in the records of that parish. Or for that matter in all the other parishes in North Yorkshire?

*I have reason to believe that this job description was a fabrication designed to elevate James in the eyes of his family. All parish records show that both his father and grandfather were simple wool combers – and not the more wealthy middleman (the staplers) who brought the wool to the combers.

James’ parents’ marriage details eventually came to light, courtesy of the internet and the parish records collated by the Mormons for their International Genealogical Index (IGI). Ditto the baptism of his older sister, Mary. The location for both these events was the medieval Church of St Anne, in Catterick, North Yorkshire. But for years James’ early beginnings were still invisible to me, although everything I’d learned about genealolgy shrieked that he was out there somewhere, possibly hiding in plain sight.

It was only relatively recently that I found out why I had never been able to find James in the North Yorkshire records. This was because he had actually been born and baptised in another county. Then I was on to the scent like a bloodhound, and at the first opportunity took the early morning East Coast trainline from Edinburgh to the upmarket university city of Durham. When I blearily boarded the train clutching my briefcase and a takeaway coffee at 7am, I had no idea that that by the end of the day I would know more about my Yorkshire-born ancestors than I could ever have expected.

However, to start this story we have to go back even further. To the time before the internet when I began my genealogical search; to the time when I thought James had been born and bred in Catterick. In the late 1980s, my mother purchased a microfiche reader along with a box of microfiche from the IGI after I’d stimulated her latent interest in family history. And together we pieced together a Catterick genealogy that was so wrong. My mother even embroidered a sampler of the family tree showing Ralph and Elizabeth Skelton at the top, naked but for a snake and apple (bullion knots were used to good effect). But while they might have been distant relatives, they were certainly not the ones we should have been looking for.

Catterick was never the permanent home of the Skeltons, but for years I persisted in believing this erroneous fact. In 1991, I finally had the chance to visit Yorkshire, riding pillion up from London on a friend’s Norton motorcycle. We headed for Catterick and explored the village, with its two greens (high and low), and stomped around the graveyard of St Anne’s looking for Skeltons. Later we cooled our feet in what I thought was the Swale but was actually just the Brough Beck, a tributary which meandered through the village, lending it a special beauty. 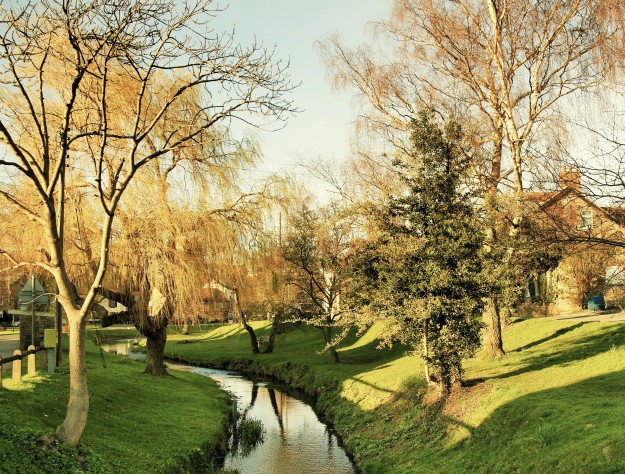 Despite the fact that I could find no trace of any of my ancestors on that visit, I’ll never forget my first sight of the Yorkshire Dales. I’d spent two and a half years travelling and working my way around the world before that summer, but could not remember seeing a view more spectacular than the great expanse of wide valleys, with their rivers and becks, wooded hills and stone walls which followed the contours of the land. Looking back, I wonder now whether this response was not tapping in to a primeval connection to the place of my ancestors. Or possibly it was just my natural reaction to a landscape that resonates with the part of the human brain hardwired to prefer particular locations like the Dales that are safe and fertile, and where early man was thus attracted to settle. 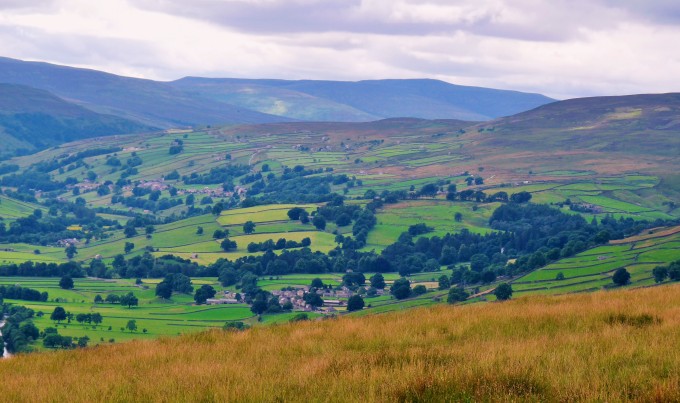 The landscape of the Yorkshire Dales

Since that time I have been back to visit Catterick a couple of times, once renting the old Blacksmith’s house on the High Green, an 18th century stone cottage that was certainly there at the time of my ancestors. Rather poignantly, I could hear the bells of St Anne’s. from the upstairs bathroom, a sound that my Swiss husband proclaimed as being ‘very English’. From our base in Catterick we took trips into both the North York Moors National Park to the east and the Yorkshire Dales National Park to the west. And it was in the latter place that we fell in love with the market town of Reeth and the surrounding area of Swaledale. 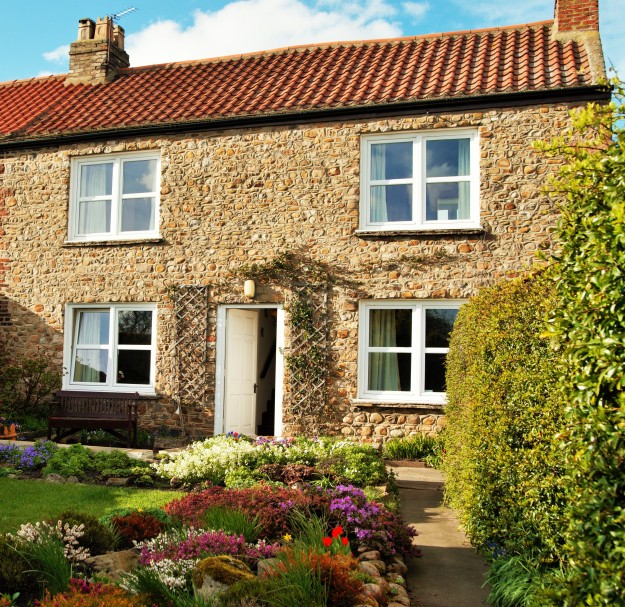 Both Swaledale and the neighbouring Wensleydale very quickly wove its magic on us and several walking holidays in Reeth followed in quick succession. While there, I would sometimes try to fit in a couple of hours’ research at the North Yorkshire County Record Office in Northallerton. It was here I was finally able to view James and Margaret’s parish wedding certificate, which showed that Margaret had previously been married to a man named Bowes (unfortunately I have never been able to discover her maiden name as this is a common regional surname).

But it wasn’t until that day in Durham, when I could access the parish records from another county, that I began to piece together the story of the Yorkshire Skeltons and their connection to Wensleydale.

I also discovered something that made me question the way I had approached my genealogical research up to now.

To be continued next month.

1 thought on “A Tale from the Yorkshire Dales: Part 1”