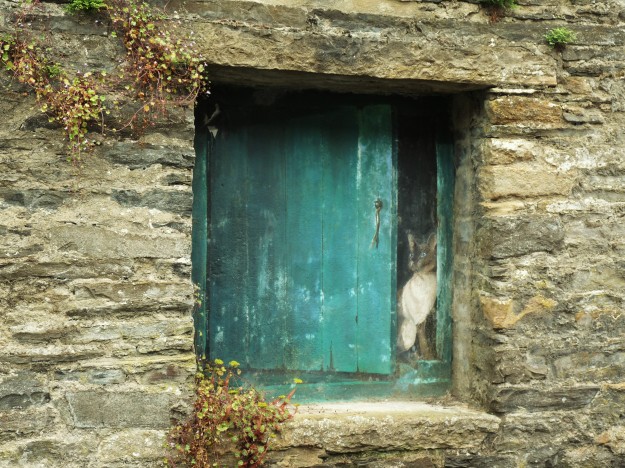 Happy New Year! 2020 marks the start of the fifth year of searching for my ‘lost’ London ancestors with over fifty tales already written. On the way, I’ve uncovered madness, illegitimacy, poverty, riches, and bigamy. (I feel there must be a murder or two tucked away somewhere). I’ve learnt that things that may shock us today today were once considered more commonplace – and how the opposite is also true. My research has taken me on a physical and psychological journey through London and beyond. I’ve come to know parts of the capital I’d never normally have thought to visit, as well as exploring the Yorkshire dales of my pre-London ancestors and visiting locations as far afield as the goldfields of Victoria, Australia.

Yet how many more untold stories are still out there, waiting to be disinterred?

There are times when I’ve become so fully immersed in previous centuries that I almost feel as if I’m living with one foot in the past. Last year, when researching my grandfather’s role in the First World War (see Portrait of my Grandfather as a Soldier), I often wrote the date as 1918 instead of 2018. Sometimes it even seems as if the past is dragging me down – hanging on to that metaphorical foot – so that I’m not as present in my own life as I’d like to be. Other times, the past unexpectedly illuminates the present like a roving searchlight: for a short while there is a clarity and connection, and then the light passes on and the shadows gather round again.

My quest has been an exhilarating and infuriating project to undertake, and one which has made me aware of my own strengths and weaknesses as a researcher. But by setting myself monthly blog writing deadlines, I’ve been forced to turn a pile of disorganised notes into a coherent narrative, helping me to make sense of my ancestors’ lives and the times in which they lived. As the omniscient storyteller, I have been in possession of an uncanny power which has enabled me to follow whole lives from start to finish in a matter of hours. I knew one ancestor would die through lack of an undiscovered, yet simple, drug, even when writing about his birth; I was aware that another would became wealthy through a business which would be considered unethical and unsustainable today, yet all the while being proud of this young man’s successful career. Yet it is only through 21st century technology that I can have this macabre ability to view someones’s past, present and future all at once. 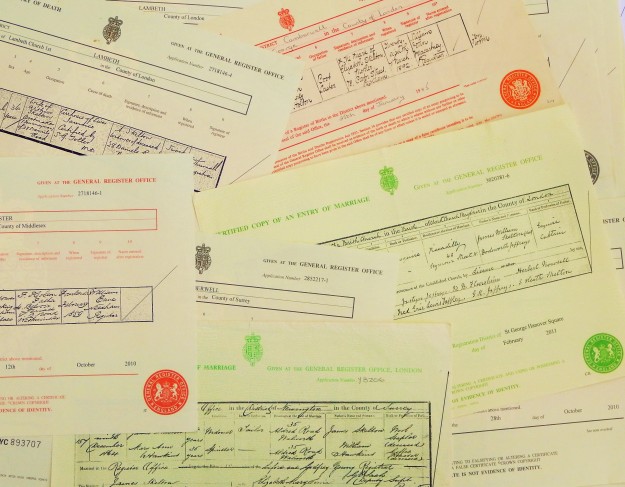 Red for Births, Green for Marriages, Black for Deaths

When I first went to seek work in London in the technological dark ages of 1984, with a suitcase full of garish clothes and a mediocre science degree, I had no idea that several weeks later I’d be a trainee heir hunter, spending my days prowling round the government record centres in Holborn and beyond (see The Incidental Genealogist is Born). December 1984 found me invited to my first ever office Christmas lunch in order to meet the handful of staff which made up the tiny probate genealogy business to which I’d accidentally become apprenticed. We gathered in a dark wood-panelled City dining room with heavy cutlery and damask tablecloths on a cold winter’s day which seemed bright with possibility. I remember feeling rather grand as I ate my first ever ‘avocado pear’ – like a girl in a film about ‘making it’ in London or some such rubbish, although at the time I took it all quite seriously.

Possibly the warning signs were already there: I was replacing the youngest member who was leaving to go to America. This might have been the same woman I met that day whose husband was a member of the band Pilot (which I remember from my schooldays as having two big hits in the seventies with the very catchy January and Magic). The other employees were all at least two or three times my age and once I started working in the office their vocbulary and and cultural references occasionally flummoxed me. A middle-aged woman called Mary Lush introduced herself with a joke about her last name and later once alluded to the boss being a bit of a Walter Mitty figure. (I asked my parents about both of these things during my weekly phone-box-at-the-end of-the-road call home).

I regret not staying longer in the job to learn more about probate geneology – it could have been an exciting opportunity to become involved in what appeared to be a growth industry. However, the old fashioned office hierarchy and low ‘apprenticeship’ pay, coupled with the lack of opportunities for meeting others in my age group, made me seek pastures new after my three month probation period was over. I feel slightly ashamed of the fact that I did not give the position more of a chance, and so let down those in the company who had invested their time and energy in training me. Of course, in those days I did not see it like that at all and felt that I had had a lucky escape from the stifling world of the dead and – to my mind – half-dead.

Ah, if only I’d had my middle-age sensibilities all those years ago! Not only in regards to employment opportunities, but in my understanding of the concept of time passing. In those days, elderly relatives (and sadly not so elderly, although they would now be elderly had they lived) were still all around me and their memories could have been more skilfully tapped and bottled for the future. But 1984 was the future then, and at that point I could not imagine myself ever looking back on my years in London with my American tan tights and 50p vouchers for ‘luncheon’ and see it as old fashioned in any way.

Of course, now I treasure the chances that remain to talk to those who are the last link to the London of my ancestors (see Return to East Coker), and am beginning even to feel that my own memories may soon be classified as ‘of value’ to social historians. (The Victorian school with the outdoor toilets and the hand bell and coal-fired furnace certainly springs to mind here!).

But as I sit at my desk in late December, I consider what led me to my quest and what has kept me going all these years – and perhaps more importantly, whether it has truly helped me in any way to understand my unknown London family and its dynamics. I can now say unequivically that it has, albeit in unexpected ways. I have learnt a great deal more about social history than I could have gleaned from books alone.  Particularly enjoyable have been these little ‘side jaunts’ down roads (paved and unpaved) which led me to explore the story of the lost Effra river in South London (see A River Ran Under Them) and the history of the Victorian goldrush (see Maldon: A Notable Town) amongst other subjects.

After all those hours and words, I believe I have now come to better understand the motivations of my ancestors, whose strengths and weaknesses were exacerbated by the times through which they lived. I can also see how this has affected future generations, leading to patterns being repeated – or rejected – down the years.

Above all, my search has highlighted how fleeting our time is on the earth and how interconnected we all are, as our actions reverberate into the future and outwards into society at large.