In sheltered places in south-west England, the snowdrop begins to flower at Christmas, and in other parts it is welcomed as one of the first signs of spring, flowering from January to March. The drooping bell-shaped flowers have six segments – three white ones outside the flower and three tipped with a bright green spot inside. It is doubtful whether the snowdrop Galanthis nivalis is a native of Britain. It was probably introduced in medieval times from central Europe and is rare in Ireland.

AA Book of the British Countryside (1973)

Last month, a calendar arrived from North Yorkshire with the first postal delivery of the year. It was a personal homage to the Dales from a friend and fellow social historian, and featured twelve distinct photographs of the region in different seasons. As I flipped through it to see what each month would bring – January was a bleak but beautiful Arkengarthdale – I could not help returning again and again to February’s image, which depicted delicate drifts of snowdrops in the gardens at Kiplin Hall. I recalled visiting this Jacobean house and gardens one cold April a few years back when the weather had precluded walking in the national park. At that time of the year, the estate had been full of daffodils in nodding clumps everywhere, giving hope for the warmer months to follow.

As a child I had always been fascinated by drifts of snowdrops, and every January I eagerly searched for my first sighting – which in the mild climate of south-west Scotland was often early in the new year. I grew up feeling that snowdrops belonged to January, just as crocuses did to February and daffodils to March. April was always associated with the blood red tulips which flanked the front entrance porch to our house. This was a suntrap from early spring onwards, and my mother often liked to sit and sew there on warm afternoons. She was sometimes in that spot when we came home after school, and the smell of tulips can suddenly bring back memories of finding her settled in the old nursing chair at the open door, a piece of hand sewing on her lap.

Although our house was set back from the main road, I used to think it strange that my mother chose to sit at the front door, whereas my father and I preferred the privacy of the back garden. But now in my own house, I eagerly soak up the early season sun from the steps which lead down to the south-facing front garden. There I can read or write while surrounded by the scent and sight of early blooms and the buzz of insects. This speeds up the arrival of spring, as well as extending the summer season, and feels almost as if I am able to tamper with time itself.

In this same front garden, the snowdrops are strung out in clumps along the base of the old hornbeam hedge; and just like in the the cooler climate of North Yorkshire, here in Switzerland they don’t usually get going until early February. As our spring is concentrated into a short but intensive season, there is often the strange spectacle of all my childhood favourite bulbs being in flower at once. This is in contrast to the mild protracted springs of south Ayrshire, where the first drifts of snowdrops in the local woods and parks in early January always used to lift my spirits and give me hope for the new year ahead.

Yet like a spurned lover who refuses to believe the relationship is over, I still search for the green spears and white buds among the leaf litter at the beginning of the year. And I have come to believe that the landscapes of our early years are imprinted on us, whether we are conscious of this or not. An Australian friend here in Switzerland, for example, dreams of big, wide blue skies; a Dutch relative for the long, cold beaches by the North Sea. And although I also yearn to be by the sea, I grew up in an area where most of the local walks were through the woods and parklands of former private estates.

Thus I often seek out similar paths on which to hike, wherever I am in the world. Having also very strong olfactory memories associated with the damp, mild climate of Ayrshire – the smell of rotting bark, fungus, and decomposing earth – I enjoy walking in woodland on wet days or after rain showers, particularly in spring, when the scents of new life arising from the damp ground seem especially poignant.

Walking trails in woodland by the sea, Culzean, Ayrshire Scotland

My ancestors no doubt carried their own memories of their childhood environments. My great-great grandfather James Skelton (see The Tailor of Horsleydown) would have remembered – and perhaps hankered after – the distinctive countryside of the Dales, while establishing a life for himself in crowded riverside Bermondsey. And in a strange reversal of circumstances, my father was sent out of South London to the rural Somerset village of East Coker as a schoolboy over a century later (see East Coker). His love of nature and the British countryside appeared to stem from this wartime evacuation, and I believe he was never truly at home again in London, even chastising me for wanting to move there myself when I’d finished my studies.

In contrast, my London grandparents always loved to visit formal parks and gardens – a hangover perhaps of the late Victorian/Edwardian time in which they lived, when ordinary working class Londoners did not often venture beyond their neighbourhood. Many of these green spaces were controlled environments with a whole host of rules and regulations, more suitable for Sunday strolls than spontaneous play (see A Tale of Two Parks), so it likely that their childhood memories were of car-free back streets. My grandmother certainly did not appreciate rural life in East Coker as much as her three children did, although it is fair to say that having to leave her own home and friends, as well as being separated from her husband, must have been a contributory factor. What might have been an adventure to young teens, would have been a stressful and precarious time to the middle-aged, especially as the horrors of the previous war were still relatively recent. 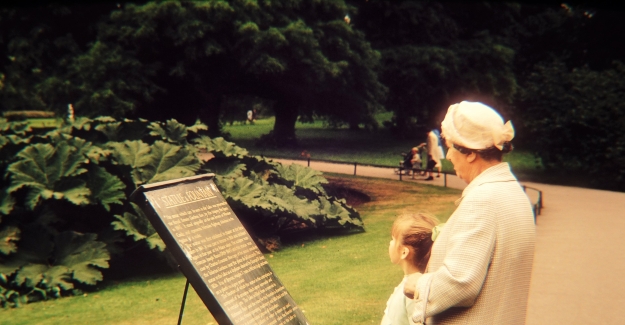 At Kew with my English grandmother, c1971

So just as I associate my London grandparents with day trips to Kew Gardens or Bushy Park, both places which were relatively near to their retirement flat in Hampton, my father is always linked in my mind with hikes along the coast or in the hills. Although his shift work meant he often went walking alone, with just the dog for company, I would sometimes tag along at the weekend. This was always an opportunity for us to have our most relaxed chats and Dad would tell me tales about the things he’d seen and experienced on other outdoor excursions – often with his trademark dry sense of humour. It was then that I learnt a little more about his boyhood in East Coker and how the evacuation years had fostered his love of the countryside.

Always curious about the natural world, he hardly ever went out walking without his binoculars and a bird or plant identification guide. I still have battered copies of some of the books he used, and it can be a disconcerting feeling to come across notes my father scrawled in the margins. One of the larger reference books we always kept at home (with which I became particularly obsessed) was the AA Book of the British Countryside. First published in 1973, this unwieldy tome was laid out like a colourful encyclopaedia, and had an eclectic mix of entries, including notes about architecture and railways alongside information on indigenous flora and fauna. I would sometimes set myself the goal of learning all the articles for one specific letter over a weekend, but often gave up in frustration as so much seemed to be focused on southern England, so did not seem to be applicable to my own situation. (The term ‘found mainly in the south’ was always rather off-putting, making me feel I was living somewhere inferior). How lucky my father had been to live in that hallowed place as a boy. Yet I was too young to realise that the beaches of the Scottish south-west coast and the rugged beauty of the Galloway Hills were possibly just as exotic to him as the idea of Stonehenge or the New Forest was to me.

Recently I came across a copy of the original AA Book of the British Countryside in a second-hand bookshop, and since then have spent many happy hours rereading my favourite entries and marvelling at what a work of art the book is, with its old fashioned type and layout only serving to increase the charm. Although some of the entries are critical of certain environmental issues, such as landscape disfigurement and pollution, the book is almost silent on topics we would expect to be discussed today, and as such seems rather quaint and outdated for a modern audience. Perhaps it is the fact that it published by the Automobile Association (AA) which creates the greatest cognitive dissonance in the mind of the contemporary reader.

Such criticisms aside, the book was one my father and I both loved and we would frequently use it as a reference book and learning tool. Now it is sitting on the bookcase in my office, and the sight of it gives me a frisson of pleasure, taking me back to simpler days when I’d come home from a family walk and look up something of interest, happy to be expanding my knowledge for some future time when it could surely be put to good use.

But of course our lives often do not turn out exactly as planned, and while my father possibly dreamt of a retirement in which he would have more time to spend outdoors in nature, his freedom was in actual fact very short-lived. Twenty-five years ago, he passed away after a relatively long illness at almost the same age as his Yorkshire born great-grandfather, James Skelton. However, James’ death from bronchitis, a few days after his 68th birthday, was perhaps more expected, and by then he’d outlived one wife and at least two of his children.

There were snowdrops in the Ayrshire Hospice that January day in 1995, a quarter of a century ago now. Bunches of them in simple glass jars, decorating the bedside cabinets of the patients. Including one at my father’s empty bed.

I remember thinking that I would never feel the same about snowdrops again. But the fact that the sight of their delicate drooping heads can still give me hope for the future only seems to emphasise the redemptive power of nature.