Last month I returned to Scotland again for a short visit. And in a brief sunny two-day window bookended by cold and wet weather, my mother and I headed over to the west coast to visit my younger sister. Since we’d last seen each other, she’d moved into an old quarryman’s cottage in a tiny Ayrshire village. Set on the banks of the river Ayr with a nature reserve at her back door and a welcoming neighbouring pub with great food  it was the perfect location for a weekend away, bringing back memories of our Ayrshire childhood in the seventies.

My sister’s terraced cottage was decorated in her eclectic style with objects old and new. In the entrance porch I was surprised but pleased to see the twin brass eagles that had graced my grandparent’s mantlepiece for all the years I’d know them. They were made by Robert Neilson, my grandmother’s father, who was a brass finisher by trade. As a child they’d always fascinated me – as they obviously did my sister – and they were just as exquisite as I’d remembered, with the strange detail that had intrigued me at the time: the birds’ flat-topped heads and outsized feet; their arched wings and the indentations of their feathers. I automatically reached out to touch them, as I’d always done, and felt that same unexpected coldness and roughness. 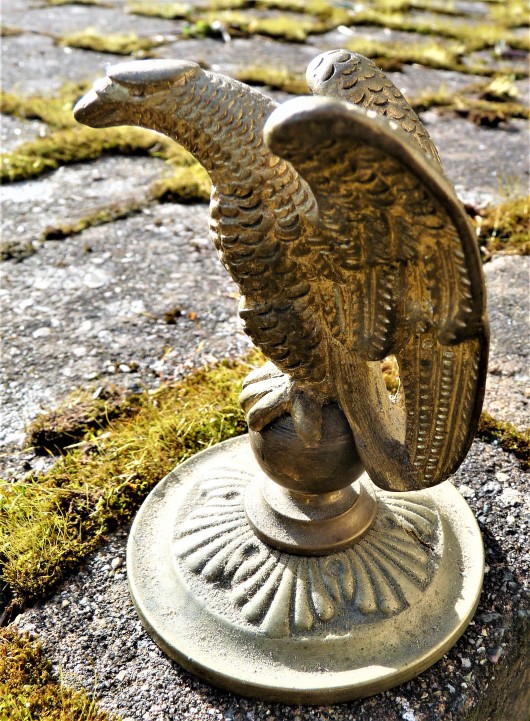 In the small room at the front of the house was an even greater surprise: the lost portrait of our Great Uncle Adam that I remember so well from the day we triumphantly unearthed it from my grandfather’s garden shed. That warm afternoon we’d set ourselves the task of emptying the shed of all its accumulated junk in order to make some play room for ourselves. I still can recall the musty damp smell of the tiny wooden building and the wonder as the area outside the shed filled up with all the tools and boxes that had been stored there (looking like it had doubled in amount once freed from its confines). Soon we could see a wooden floor and knew that we were on target to achieve our goal. Except we hadn’t quite worked out how everything would go back in. 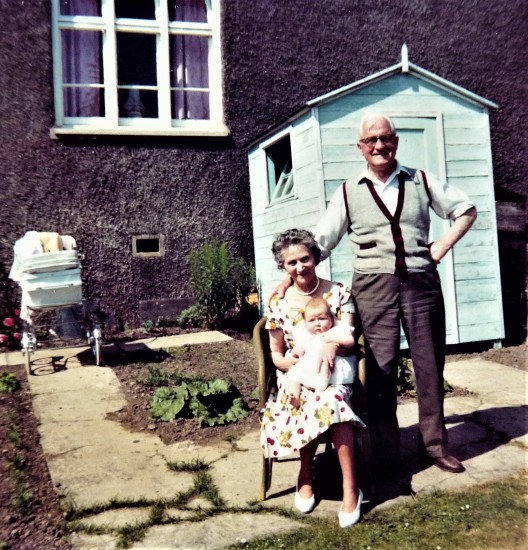 With my grandparents in summer 1964 – the shed is behind us

We were lucky that day that my grandparent’s were fairly sanguine about the enterprise, using it as the spur they needed to get rid of some of the unwanted items they’d forgotten about over the years. But I’m not sure what they thought when we came proudly back into the house carrying a large and unwieldy framed photographic portrait of a young smiling man in military uniform. Oh, it’s Uncle Adam they exclaimed. When he was in the war. By that they meant the 1st World War, in which Adam Neilson had enlisted in the Signallers in 1914 at the age of 16 by saying he was older than he actually was. His parents had been furious and tried to get him out of the contract, with Great Grandma seemingly upset about the fact she’d just bought him an expensive new winter wool coat. Yet he had survived the conflict – like my London grandfather he felt it better to choose his regiment rather than be conscripted later – and gone on to become a much-loved uncle and now our oldest great-uncle. 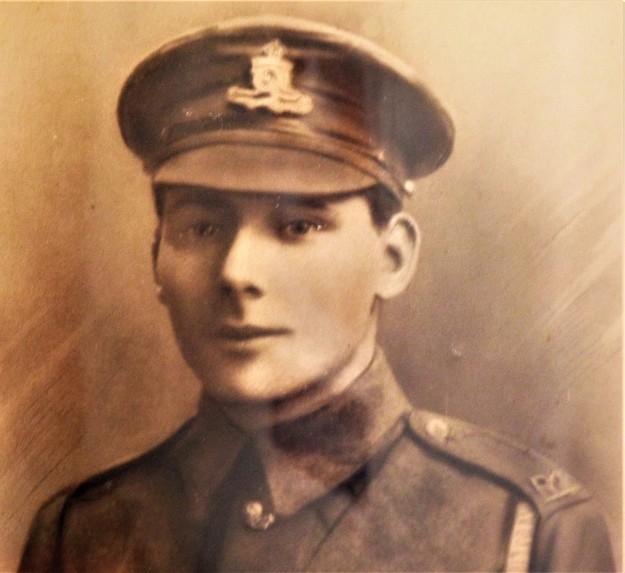 The Incidental Genealogist, May 2022