In last month’s post in my new genealogy blog A Scottish Family Album I described my search for pictures of children and their toys in amongst my Scottish family photograph collection. I was surprised to discover there were not as many of these as I’d expected, surmising that the grown-ups who’d taken the photographs had most likely decided in advance how the children should be photographed. Possibly they did not want any toys to be a distraction. In contrast, the formal studio photographs often showed children with wooden or classic toys, which may have been given to them by the photographer to create a naturalistic setting or to relax the young sitters.

I remember my father hadn’t been keen to encourage us to line up our dolls and stuffed toys for the rare times he had his camera ready, regarding it as a waste of good film, and I recall sneaking my ‘teddy-bear cat’ into family photographs. When he did give in to my demands for a portrait of Pussy Willow, I proudly posed him on the back steps of the house for the occasion, dressed up in an outfit belonging to my younger sister. 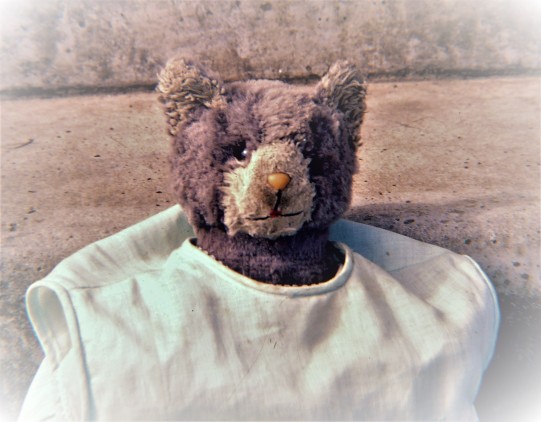 Like many children, I adored my stuffed animal toys more then plastic renditions of babies or functional items such as building blocks and Lego sets. A soft item which can be cuddled obviously has a much greater chance of being loved and even improves with age as its battered parts are a reminder of all the hugs over the years. That’s possibly why my mother preferred Panda and George to her French bisque doll Margaret (see Toy Stories: Part 1), who by dint of her antique status was only ever allowed to be played with under supervision, and never outdoors.

It is also the reason why I did not have many dolls myself, and those I did possess tended to be treated cruelly. The only doll I can really remember (and still have ) was called Linda, named after my mother’s much younger teenage cousin who seemed exciting and glamorous. Unfortunately, she (the doll) was often forced into doing the sort of activities that the cuddly stuffed animals would never have to endure.

While researching and writing the story of my ‘lost’ London ancestors, I published a post entitled Of Lost Toys and Mothers which compared the childhood of my London-born father with that of my Scottish mother. My father’s experience of being a wartime evacuee in Surrey then Somerset (see East Coker) was very different from that of my Edinburgh-born mother, ten years his junior. Even though my mother went to live in the countryside outside Edinburgh with my grandmother for a few months early on in the war, she was an infant at the time and thus has no memories of that period. Not only that, but my maternal grandmother had simply to take her baby daughter several miles out of the city to the village of Roslin, where her older sister Bessie lived with her miner husband and two young sons. It was certainly much less of an upheaval than the four years my father and his siblings spent with their mother in East Coker, living with strangers, with my English grandmother trying to eke out a living by undertaking odd jobs in the locality.

As I pointed out in Of Lost Toys and Mothers, my father and his siblings ‘lost’ their childhood toys when their London home was partially damaged in a bombing raid and the contents stored with relatives who lived nearby. When my paternal grandfather later went to retrieve the items, he quarrelled with that branch of the family and never spoke to them again. Later my aunt told me she suspected they had been using the furniture in their own home, a fact which had angered my grandfather, who was prone to irascibility.

When writing Of Lost Toys and Mothers, I also mentioned my Scottish family, stating that: I remember once when I was staying with my Scottish grandmother after she had been widowed, and my mother had helped her clear out a cupboard built into the floor of the cloakroom in the hall (or lobby press, as we called it). This had always been my grandfather’s domain (being dark and dusty and full of spiders), and when my mother took it upon herself to rummage about in the space she found a cornucopia of old toys, many of which she’d been bequeathed from older relatives, including a china doll given to a soldier uncle by a French family in France during WW1, a metal spinning top, and a couple of strange wooden objects we had to be taught how to use! This also spurred my Scottish grandmother to reminisce about her favourite childhood games – including the metal hoops that she and her siblings played with in the street (which seem to be the ubiquitous image of turn of the century childhood). I vowed then that I would never let my favourite childhood toys languish in an attic or basement space. 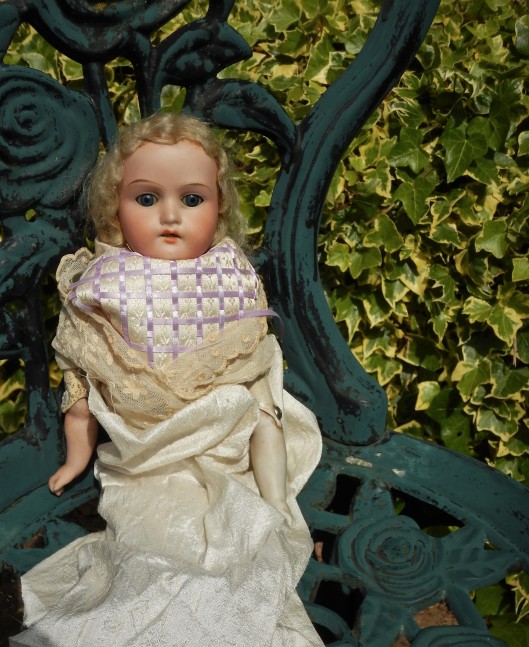