When I first became a genealogist of sorts, hardly anyone I knew had heard of the profession – let alone how to pronounce or spell it properly. But ever since genealogy became ‘the new black’ of pastimes, no-one can now be excused for confusing it with gynaecology or genetics or anything else vaguely biological. With the success of television shows, such as Who Do You Think You Are? and Heir Hunters, alongside the proliferation of internet sites and magazines dedicated to all things genealogical, it has now become a household word – and the current hobby of a large percentage of those in receipt of a free bus pass.

Back in 1984, however, most people could do little more than guess at what the technological revolution would unleash. Even that harbinger of our silver-suited future, Tomorrow’s World had only an inkling of the invention that would bring both porn and family history (two of the most popular uses of the internet) into our homes. In that Orwellian pre-internet year, fresh out of university with a mediocre science degree and facing the economic realities of the North-South Divide, I made the decision to follow Norman Tebbit’s advice, and went to London (albeit in the overnight mail train from Stranraer rather than bicycle) in search of a job. 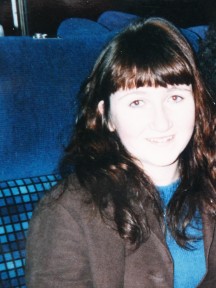 On the overnight train to London

And lo and behold, one day before Christmas, when London was looking its most enticing – and expensive – I spied an advertisement for a trainee genealogical researcher in the window of the Job Centre in Kensington High Street (where the more glamorous appointments were said to be found). Even my interviewer was not clear what exactly I’d be doing for £3 an hour, 35 hours a week. But what I do remember is that she made the job sound rather exciting – like becoming a private detective without the risks. Although the advert had caught my eye because it had initially looked like a job where my biology degree might come in useful, anything was preferable to my current temporary position of shelf-stacker in Sainsburys, West Ealing.

Two days later, on a bright December morning, I went to my interview in a tiny office on the top floor of the impressive Africa House on Kingsway (All those statues! All those marble stairs!). I never thought to ask the elegant middle-aged man who interviewed me from behind the large mahogany desk what exactly he would do with the results of my genealogical research. I was too busy trying to look sophisticated in my American tan tights and scratchy wool suit (bought from a discount store in my home town the day before my departure) than to worry about the company’s ethics. Besides, ethical concerns were not top of anyone’s agenda in 1984, least of all in Thatcher’s London. 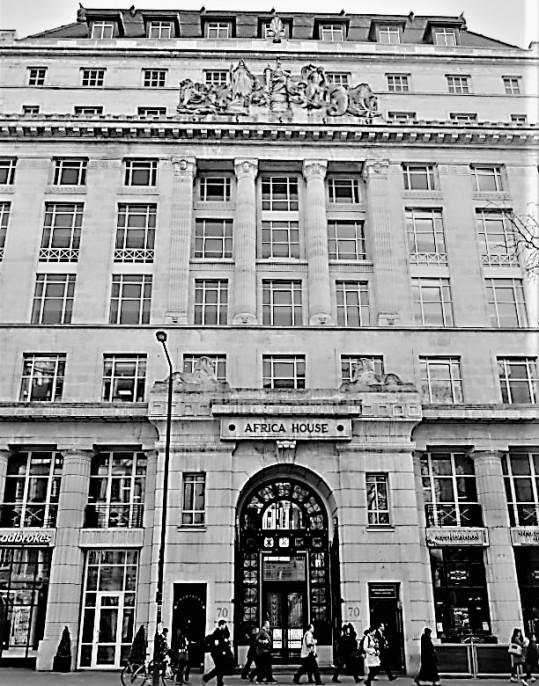 Eventually I discovered that the firm’s main source of income came from matching up unclaimed legacies with missing relatives. Basically, they were probate genealogists – or so-called ‘heir hunters’ – but I was never quite sure of the ins and outs of the business. The staff had obviously been told to keep me in the dark whilst I was undertaking my three months’ probation. Even on my first day of reporting for duty, I was cautioned not to have contact with other researchers, however friendly they might seem. Later, I had to sign an agreement which stated that I would not take up employment in a rival firm within a one mile radius of Africa House for up to two years after leaving the company. This sounded decidedly dodgy, even to my young, provincial ears, and I knew then that the job must be something involving money and subterfuge. I decided to work in blissful ignorance, simply allowing myself to enjoy the frisson of excitement that came from the successful location of all the lost relatives I was sent to find.

When I first started the job (and to this day I cannot remember the name of the company – I could almost swear it never had one), there was another researcher working ‘in the field’ with me. Cyril was a tall, stooped man, who used to be something in the City, and who’d come out of a bored retirement in the Home Counties to put in a couple of days a week at the records office. Once our research was over for the morning, and if the weather was fine, Cyril and I would cut down Surrey Street to the Embankment and eat our packed lunches on a bench overlooking the Thames, throwing our crusts to the lone Muscovy duck that used to claim that stretch of the river. I enjoyed Cyril’s company – he was an antidote to the loud and brazen money-crazed yuppies who seemed to be everywhere in London that year. But one morning, arriving late in Alexandra House after a delay on the Northern Line, I found Cyril collapsed in a chair in the black-booked corner of ‘Deaths’, a bucket at his feet and a concerned assistant nervously hovering over him. An ambulance was called for, and after that episode my fellow researcher disappeared back into retirement (much to the relief of his adult children) and I was left on my own to carry out the ground work.

After a couple of months in the job I began to grow rather frustrated – what had initially seemed like a challenge had now become routine. I started rushing through the lists of people I had to find before sneaking in some time to look for my elusive London ancestors. This helped to break the monotony of searching through the heavy records books for several hours a day (punctuated by the occasional jaunt to Somerset House or the Public Record Office in Chancery Lane), and sometimes I could even combine the two tasks if the search periods coincided. Coming across a relative’s name scribbled by some registrar or census enumerator gave me a thrill that those of the unknown people on my list never did. When I started ordering copies of their birth, marriage and death certificates to supply the additional information the records lacked, it was even more gratifying to see the familiar family name scrawled across the page, often in my ancestors’ own hands. 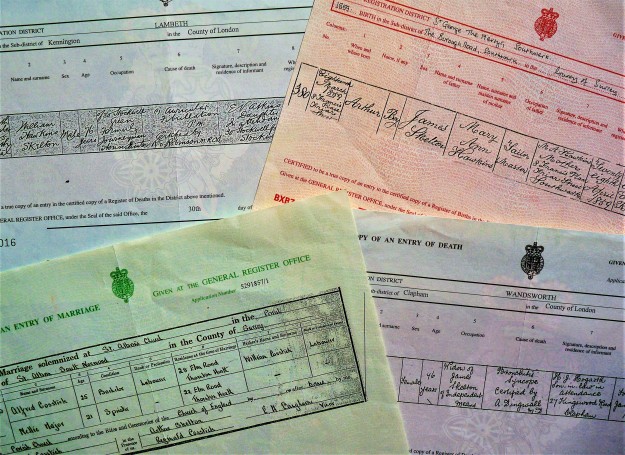 In the nineteen-eighties, all the birth, marriage and death records had to be consulted in situ in the large unwieldy books which were shelved chronologically in St Catherine’s House (blood red for Births; spring green for Marriages) and Alexandra House (Deaths in black, of course). There was a sort of comforting rhythm that I would fall into – lifting the books, flipping over the pages, replacing them, moving onto the next, scribbling into my reporters pad. Apart from the thump of books and the shuffle of feet along the rows and the occasional stagey whisper, the place was usually quiet. There were no inadvertent throbs and tinkles of mobile phones, or the sound of computers whirring and chiming. The professional genealogists (of which I almost felt a part) worked quickly and methodically, briefcases at their feet, eyes averted from making contact with their rivals.

As the morning wore on, amateur researchers, up in London for the day, used to come in with their tuck boxes, much the same as they come to the London Metropolitan Archives in Clerkenwell today. But unlike the airy rooms of the LMA, with their computer terminals and changing exhibitions, the dark and stuffy records offices were strange places to be sequestered for a young woman eager for life in London to start. I was certainly not sad to leave it all behind me at the end of my three-month probation period for a job as a trainee virologist at a lively teaching hospital.

I knew that one day – when the time was right – I would return to my research.

But what finally started it all off again one dismal autumn day, over a quarter of a century later, was a documentary about a family I knew or cared little about.

To be continued in my first blog post Begin Again.